A few people have noticed and commented on how I capitalize certain words in my blogs, so I thought I would share my reasons why.  Over time, certain things aren’t just objects to me.  They take on a life of their own, with personalities and deep meaning.  One of the biggest would be “the Farm”.  Ten years ago, when I first came to the Farm, I didn’t have a very big connection to it personally, other than that was where the Man was, and it’s where I belonged.  Built in 1810, it had gone through many renovations and additions over time, and it wasn’t until the Man and I decided to bring it back to it’s former glory did it start to feel as though I belonged.  I’m a carpenter by hobby, something that is deeply rooted in my genetics, passed down through generations of Dawes men.  The one thing I didn’t plan on was how difficult it would be to deconstruct and rebuild a nearly 200 year old farm.  Every wall I rebuilt, every beam I exposed, they all brought me one step closer to the bond that was growing between this collection of buildings that I now call the Farm.  It is no longer just lumber and nails built upon a foundation of rocks.  It’s alive to me, a part of me, and I have left my mark for future generations to enjoy.  It deserves a certain reverence when it’s being spoken of… 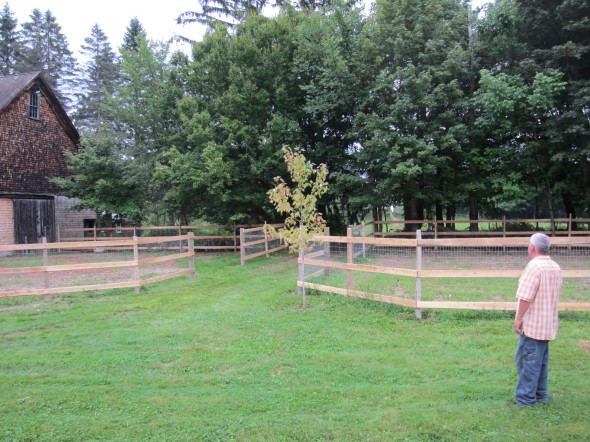 The Barn is another.  Even though it is certainly a part of the collection, it also stands alone.  When the main house was built in 1810, the beams used to construct the Barn had been taken from another, older barn.  There are signs of a fire on some of them, and on others you can see the old notches and peg holes that were part of the original construction.  If you look close enough, you may even find the occasional mark carved into the wood by the builders.  Over the years, the Barn has seen it’s share of farm animals come and go, even a horse riding school.  When the Man and I decided to ready the Barn for our horses, we discovered that those many years of housing animals before us had left the floor of the Barn completely rotted out.  Reconstructing the floor added many weeks to our schedule, but the result was that I became much more intimate with the Barn.  I had seen it’s mighty foundation built with boulders from the surrounding fields.  I saw how the mighty beams were anchored together, cut and notched by the hands of men who had likely come together for a day with their neighbors, to fellowship and raise a barn.  By the time our horses did arrive, the Barn had earned my respect both for it’s construction and it’s history.  A history that the Man and I were now a part of…

And of course, the most obvious one of all.  The Man.  He is my mate, my best friend, and my husband.  He is the one that saved my life 11 years ago.  He rescued me from a bad place where bad decisions were being made.  He showed me the love I had dreamt of, and I returned it to him, and together we set out on this grand journey.  I call him “the Man” because he is complete, and he completes me.  Other than him occasionally trying to tell me how to build something, I would not change one thing about him.  Well, maybe it would be nice if he would learn to tie his shoes and zip up his fly, but these things do not detract from the man that he is.  We will grow old together, here on the Farm, our legacy complete.  Just me and the Man…

This entry was posted on November 5, 2011 by Rick. It was filed under Uncategorized .