He walked into the Barn as he always does, with authority and purpose, and as he passed the mini horse’s stall, the nightly routine

of a few hoof stomps and a few snorts began.  It never lasts very long, this display.  It’s a nod to the resident wee horses that this Barn belongs to him, always has and always will.  He was the first to be welcomed to the Farm, and with that comes a certain status that everyone who lives here, both four and two footed, is reminded of daily.  On his testier days, he will include a high pitched whinny as an exclamation point, just in case nobody was listening.  This night, however, he chose to forgo that extra proclamation, and went directly into his freshly cleaned stall where his nightly grain and hay awaited.  After tucking his stablemates into their own stalls, I returned to his for our usual habit of quiet words and gentle scratches.  I quietly came up beside him and stretched out my hand to caress that special spot on his neck, but instead of leaning into me as he usually does, he quickly pulled away and walked to the front of his stall.  It wasn’t the first time he had done this in the past, so I wasn’t taken aback in any way.  Some would argue that perhaps he is a bit spoiled, with kingly expectations, and I’m good with that.  He has earned that right as well as his commanded status.  As I turned to leave his stall, I ruffled his mane and gently chided him that it was ok if he was tired and cranky, but he didn’t have to be rude.  Before I could reach the door, I felt his warm nose on my back, and I felt his words “I’m sorry, don’t go.  I am tired from the day, but I want you near.”.  He returned to his grain bowl, and I moved to stand by his side.  We stood there in silence, with him slowly chewing and me with just one still hand on his back.  He sighed deeply, and relaxed to my touch.  His majestic head lifted and slowly swung towards me, and when our eyes connected, I realized that I hadn’t been spending as much time with him as both he and I would like.  My days here on the Farm during the summer are full, and although I work very hard to make sure that every critter living here has their share of quality time each day, once in awhile that isn’t enough.  He took another deep breath, and then took a step back so that my face was level with his.  As I had gently reprimanded him a few minutes before, he was now quietly chiding me.  I instantly felt his need for closeness and connection, but most of all, I felt his love.  After a few moments, the spell was broken, and he started chewing as he lifted his head to expose his neck.  This time he accepted the gentle scratch, then lowered his head to rub his nose on my shoulder.  Never one for wasted emotions, he then returned to his grain and hay, but now with an air more of contentment than of concern.  I grabbed his favorite brush, and while he slowly chewed his hay with his eyes closed, I brushed away the dirt and sweat of the day.  I carefully brushed his beautiful mane, taking out twigs that he had collected while browsing earlier in his field. 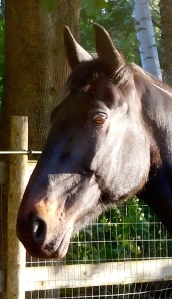 Just as I thought he might be tiring of the attention, he shifted his weight and offered one front foot to be cleaned.  I pulled my ever present hoof pick from my back pocket and set to work, with him offering up another foot as the last was finished.  As I slipped the hoof pick back into my pocket, he rubbed his forehead on my back a few times, with a slight nudge towards the door.  He was satisfied, and was telling me it was time to go.  As I reached for the handle on his door, I felt one last nudge of his nose.  “Aren’t you forgetting something?” he asked.  I followed his gaze to my right front pocket, where chances were good that I might happen to have a couple of his favorite butterscotch horse treats.  It was a safe bet, and all of the animals here on the Farm know that the same pocket almost always has something to nibble on.  Soft fuzzy lips carefully took what was offered, and when the treats were gone, those same soft lips brushed my cheek and his butterscotch breath warmed my face.  It is moments like this that I wish could last longer, but one cannot take or expect affection from a horse, only gratefully accept when it is freely given.  With one final soft knicker, our time was done, and he returned to his hay.  I closed his stall door, and gently slid the latch into place.  I made the rounds one last time to check on the other Barn residents, securing doors and scratching noses.  The Barn was quiet, except for chewing noises, and I knew that they were all content, and most importantly, felt loved.  I glanced over one last time at him as I turned off the lights, and he was standing there, warm eyes watching me.  “Good night, my friend.  I love you.” I said.  I slid the Barn door closed, and as I walked towards the house, I once again felt the warmth…and love…of fuzzy butterscotch kisses on my cheek.